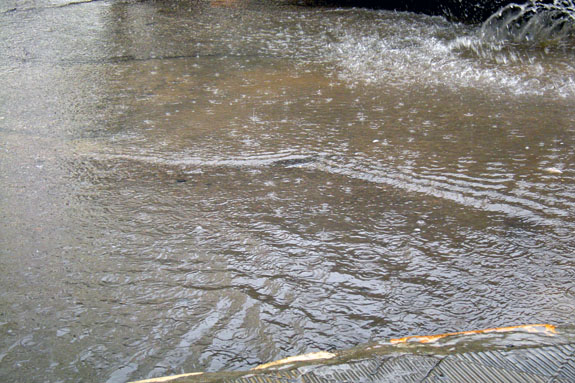 The annual Gota Fría spell seems to be settling in this year for a real string of heavy storms and torrential weather. Yesterday, the Agencia Estatal de Meteorología raised the weather alert in Mallorca again to the level of Yellow. The level Yellow indicates a risk but it could be worst; there are also the levels orange and red with even higher risks. For the moment, the weather warning will remain on level Yellow until tomorrow, September 30th. The warning was given to the Balearic emergency services indicating a forecast of severe rain and the possibility of tormentas (storms).

And severe rain storms we had indeed, yesterday, at least here in the South Eastern part of the island. Motor traffic was at an impass on various roads between Porreres and Felanitx, between Ca’s Concos and Alquería Blanca, between Campos and Porreres, between S’Horta and Cala d’Or, and in the Portocolom area. Santanyí, Campos, Manacor and Palma were also affected. At times yesterday roads had converted into rivers and torrents. There also were power cuts in Santanyí, Portocolom and Llucmajor.

The September tourists are non-plussed. The weather has been fine lately in Britain, Germany, France and Central Europe, so what’s wrong with the Islas Baleares?

The truth is that this meteorological pattern happens every year, here, at around the time of the Autumn equinox. There are always Gotas Frías, trompas de agua, autumn storms and torrential rains between the beginning of September and the beginning of October. These storms are not always everywhere in Mallorca; sometimes they occur in the North of the island, sometimes they occur around Palma and sometimes elsewhere, but storms there always are, come rain or shine. Normally the storms and downpours occur over a period of a few days, but this year, the Yellow or Orange weather alerts and the heavy rains have been with us for about a fortnight now.

It will soon be over, believe me. And it will happen again next year, one way or other. 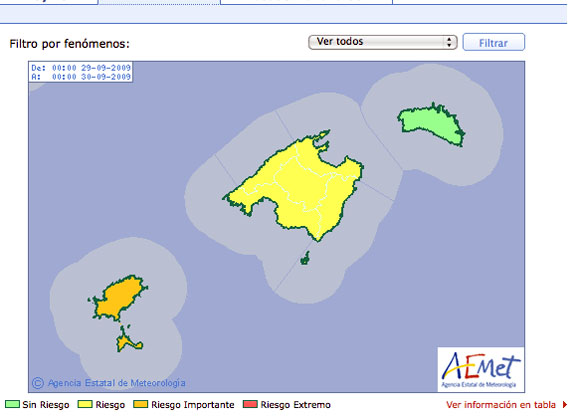 Post Script: The weather alert for Mallorca has this morning been raised from Yellow to Orange. Watch your ways.

The photo was taken in Felanitx, Mallorca, Baleares, Spain. The dates: September 23rd, 2009. The time was 12:20:54. The weather map was taken from the AEMet website. Muchas gracias.