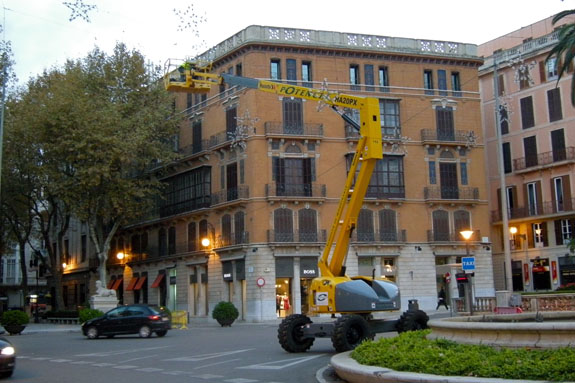 I find it unbearingly early to have seen, a few days ago, that Christmas lights were being mounted in the streets of Felanitx. Oh dear. Yesterday the same occurred in Palma, as seen here in Plaça Reina. Also, the El Corte Inglés department store in the Avenidas mounted their store front Navitat attire. But fittingly, the calendar confirms that in six weeks from today, we’ll have everybody hoping to have a jolly festive Cena de Noche Buena.

Thankfully, the Christmas lights will not be switched on for another two to three weeks, here in Felanitx or there in Palma de Mallorca.

From the town of Sóller, we hear the news that there is no money in the coffers for the local Christmas lights to be switched on at all this year. Apparently, due to the lack of municipal funds due to La Crisis, the local community of small shops and traders have agreed to collect contributions for some Christmas lights in Sóller, albeit on a smaller scale. Felicidades.