A Ginjoler Tree of 200 Years Of Age 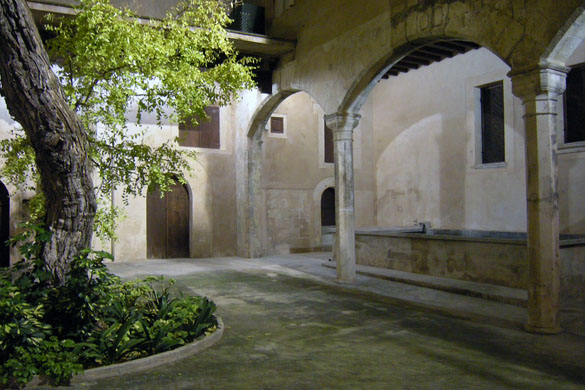 The Monestir de la Concepció in Palma de Mallorca can be proud of many things. Sadly, hardly anyone can ever enjoy or appreciate its architecture going back to the 14th century, its prized accessories or its 200 year old Ginjoler tree in the older courtyard, because the monastery is of a closed order and is tancat (closed) to the prying and inquisitive eyes of the outside world. A few weeks ago, I was allowed into the convent as part of a group on the occasion of a concert being presented there during the Setmana de Santa Cecília. I had only ever been inside the monastery’s larger patio once before, and only for less than a minute. Now, the guided tour allowed us to fulfill our curiosity for well over 80 minutes; and what a treat we had. By the way, the ginjoler tree (English: Jujube, Latin: Ziziphus jujuba, Castellano: azufaifo) is the oldest one I have ever seen; it is said to be the oldest one of its kind on the island.

You may well think what’s the point of telling us about a monastery that cannot be visited. Two things: the monastery in question may be open for a visit again next year during the Corpus Cristi patio programme, in June/July, and also, during next year’s Santa Cecília week. Just be alert at the appropriate time. And: the Ajuntament de Palma is currently conducting a guided tour under the heading of Christmas Flavours, allowing us, amongst others, visits to three monasteries in Palma, that normally are also closed, the Monestir de Santa Margalida, the Monestir de les Caputxines and the Monestir de Santa Clara. Tours are held in Castellano, Catalan, English and German, with dates in English coming up this week (December 16th and 18th) as well as next week (December 22nd), and the week after (December 29th). There is a charge of 10 € for a two hour tour, including some sweet titbits. Reservations can be made by telephone under 971.720.720.