One does not often have a chance to spot a four-masted sailing ship, at least not here in Mallorca. But a couple of weeks ago, I encountered one of the nicest sailing yachts you will ever see. The ship was moored in Palma’s Estación Marítimo. The Sea Cloud is the largest private sailing yacht ever built. The ship was commissioned in 1930 by US stockbroker E. F. Hutton and was built in 1931 at the Krupp family shipyard in Kiel (Germany) after plans by the renowned American contractors Gibbs & Cox, and was originally named Hussar. Of course the name Krupp would give it away: the vessel’s hull was built of steel. When I spotted the Sea Cloud it had just sailed across the Atlantic from Barbados. This week she should be sailing in and out of Nice (France) and next week, the yacht will be sailing to Civitavecchia (Italy). Yacht enthusiasts can find more details here.

Unfortunately, I was not allowed to get as near to the sailboat as I would have wanted. The Palma Port security personnel interfered when I wanted to take a photo from a closer range. Also I did not manage to see the yacht in its full rigging. Thanks to the Internet I can offer you a photo, though, showing the beautiful yacht in all its magnificent splendour. 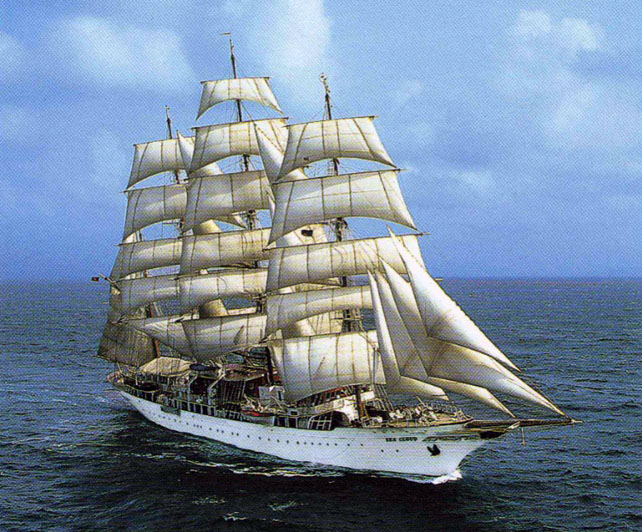 The ship has quite a checkered history to its name, or rather, to its half a dozen names. After the original owner divorced Marjorie Merriweather Post, in 1935, he gave the luxurious yacht to his ex, who renamed her Sea Cloud. The US army requisitioned the vessel during World War II and used it as a weather station. In 1957, the yacht was restored and sold on to the Dominican dictator Rafael Trujillo. The dictator’s son renamed the boat Angelita, but Trujillo Jr. was assassinated and consequently, the yacht was renamed Patria. Somehow, the boat fell back into US hands and was then called Antama. Finally, the yacht was acquired by a German owner, who sailed the beauty to Europe, had her restored in 1979 and baptized her Sea Cloud, once again. A German cruise ship company now offers the yacht to the slightly more fortunate for voyages of leisure.

The photo (top) was taken in Palma de Mallorca, Baleares, Spain. The date: April 21st, 2010. The time was 09:57:55. The photo (bottom) was borrowed from the Internet courtesy of forum.woodenboat.com and Custom Yacht Designs. Thank you very much.