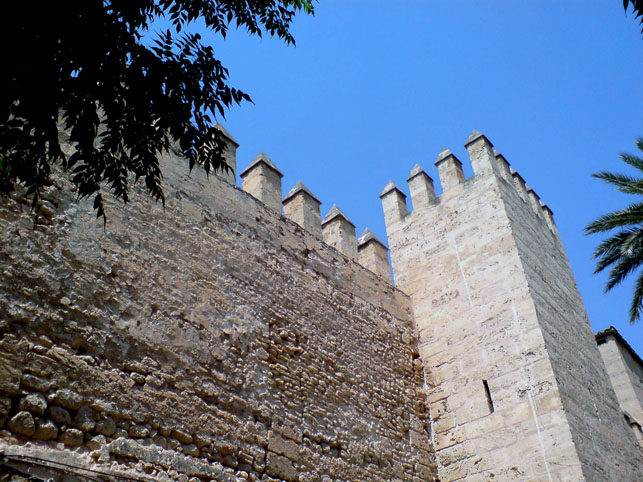 The city walls of Palma de Mallorca are, in the main, not in existence any more. Most of the city fortifications were pulled down at the beginning of the 19th century to make room for city expansion. The bulwarks would have been found where nowadays you have the Avenidas (Avingudes), leading from the seafront near the Gesa building up to the Plaça Espanya and all the way round the inner city, back down to the seafront again near the Real Club Náutico.

But the history of Palma’s city walls is more complex than that. In fact, there used to be five different arrays of ramparts, parapets and Murades (Murallas). First, there were the Roman walls, near where today you find the Cathedral. Then there were the Moorish fortifications, and some of these are still in existence to this day (see photo), remaining from what was known as Madina Mayurqa. Then, during the Gothic era, the Catalan conquerors extended the existing Arab city walls, until a massive new city fortification was built during the Modern Age, in the 16th and 17th centuries. These reinforcements were finally expanded and completed during the 18th century.

You still can find remnants of the Moorish city walls and fortifications in Plaça Porta d’es Camp, where I took today’s photo, but also in Carrer Portella, in Carrer Almudaina, and below the Palau de l’Almudaina.