A 1923 Helicopter From Llucmajor 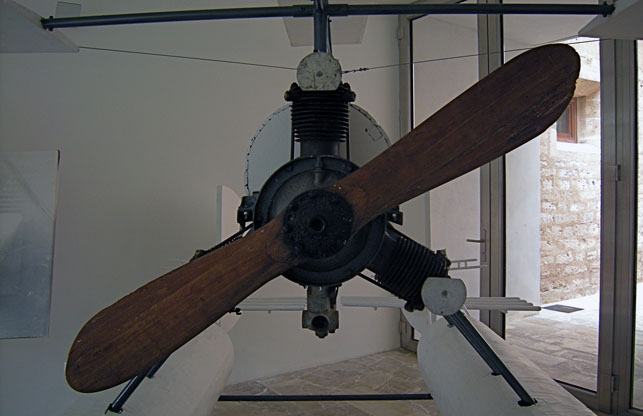 Pere Sastre Obrador was a visionary man with a passion. He was born in Llucmajor in 1895. People in Mallorca consider this man to be the inventor of the helicopter as we know it or, more precisely, a Cometagiroavion (see photos above and below). It’s a fascinating story of Don Quijotean dimensions with an unhappy ending.

The first man ever to come up with the idea of an upward gyrating apparatus was probably Leonardo da Vinci (1452-1519), but his invention (see sketch; bottom) was never built during da Vinci’s lifetime and it certainly never flew, then. Frenchmen, Gustave de Ponton d’Amécourt, Enrico Forlanini and Emmanuel Dieuaide all designed models of unmanned helicopters during the 19th century which never flew on a life-size scale. According to Wikipedia, ‘Thomas Edison patented his own design for a helicopter powered by a gasoline engine with box kites attached to a mast by cables for a rotor, but it never flew’.

Between 1919 and 1923, Pere Sastre Obrador had numerous attempts at building gyrating flight apparatuses. He presented his innovation to the Spanish government and its Ministerio de la Guerra (Ministry of War) in 1921 but, found his contraptions rejected on the grounds of a missing application in reality. Instead, the son of the then War Minister patented designs surprisingly similar to the one from Llucmajor amidst accusations of plagiarism. Interesting to know that the impostor’s flight machine only flew above ground for the first time in 1926, when Pere Sastre Obrador’s had done so in 1923. Señor Obrador died in 1965 an impoverished man with his invention unrecognized outside of his hometown.

A full-scale recreation of the Obrador gyro-plane can be seen on display at the Centre de Cultura de Sant Bonaventura in Llucmajor, complete with the original combustion engine of the 1923 copter and its genuine propeller. During the summer months, the Claustre de Sant Bonaventura is open daily from 09h00 to 14h00. The erstwhile Franciscan monastery is a place well worth a visit but, nothing much is going on there at the moment other than the display of the Cometagiroavion. The Festes de Santa Cándida de Lluchmajor are coming up soon, though, and a full programme of activities and exhibitions will be on show, then and there. You might as well delay your visit of Llucmajor until the second week of August.

The photo (top) was taken in Llucmajor, Mallorca, Baleares, Spain. The date: July 26th, 2010. The time was 11:28:14. The photo (centre) was borrowed from the Internet, courtesy of diariodemallorca.es and the Ajuntament de Llucmajor. The image of the da Vinci drawing (bottom) was borrowed from Wikipedia.

Muchas gracias, Moltes gràcies, and Thank you very much.