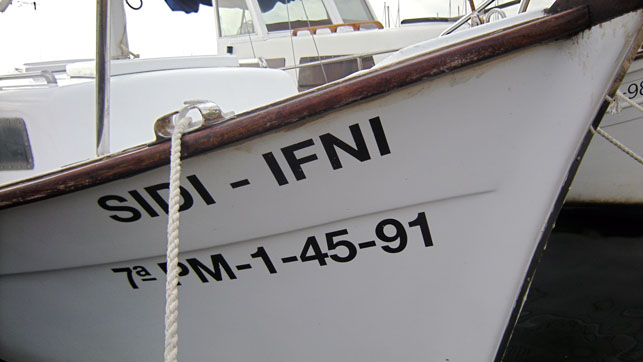 Boats in Spain and elsewhere often have names that tell a story. Often it is the tale of a loving relationship, often a symbol of pomp or showiness, often no more than the name of a place or a simple number. Walking along the Marina of Portocolom the other day, I came across this Llaüt called Sidi-Ifni. You are not alone if you don’t know what Ifni is or where it is situated. Now, here’s a story to tell, and a rather despairing one it is:

Ifni, or rather: Sidi Ifni, is a Moroccan town of about 15,000 inhabitants, situated in the south of that country, just south of Agadir, at the coast of the Atlantic Ocean. Ifni had been brought under Spanish rule in 1476, a few years before the capture of Melilla. Ifni, but not Melilla, was re-claimed by the Moroccan Saadien rulers in 1524. The Treaty of Tangier of 1860 allowed the Moroccan cities of Sidi Ifni and Telata, as well as what later was known as Spanish Sahara, to be incorporated into the Spanish colonial empire. In 1946, Spain’s various coastal and inland colonies in Morocco were consolidated as Spanish West Africa.

At that time, France was in control of all of the northern part of Morocco, plus all of Algeria. When Morocco gained independence from France in 1956, the country expressed their keen interest in all of Spain’s possessions in Morocco, claiming that it was historically and geographically all part of Moroccan territory. Sultan Mohammed V encouraged efforts to re-capture the land and personally funded anti-Spanish conspirators, Moroccan insurgents and indigenous Sahrawi rebels to claim Ifni back for Morocco. Violent demonstrations against foreign rule erupted in Ifni in April 1957, followed by civil strife and the widespread murder of those loyal to Spain. In response, Generalissimo Franco, then still very much in charge of a dictatorially controlled Spain, dispatched two battalions of the Spanish Legion, Spain’s elite fighting force, to El Aaiún in southern Morocco, in June 1957.

Spain became embroiled in a war over the dispute, the War of Ifni, sometimes called La Guerra Olvidada (the Forgotten War). The Moroccan Liberation Army was now no longer tied down in conflicts with the French, and could thus commit a significant portion of its resources and manpower to the capture of Spanish possessions. The Spanish Legion repulsed the Moroccan drive easily, but two Spanish outposts were abandoned in the face of enemy attacks. Many others remained under heavy siege.

In the space of two weeks, the Moroccans and their tribal allies had asserted control over most of Ifni, isolating inland Spanish units from their South-Moroccan capital. Simultaneous attacks had been launched throughout Spanish Sahara, overrunning garrisons and ambushing convoys and patrols. The siege of Ifni lasted until June 1958; it was uneventful and relatively bloodless, as Spain and Morocco both concentrated resources on Saharan theatres. In January 1958, Morocco redoubled its commitment to the Spanish campaign, reorganizing all army units in Spanish territory as the Saharan Liberation Army. In February 1958, Spanish troops, helped by French corps, launched a major offensive that successively dismantled the Liberation Army. For the first time, massively superior European air power was brought to bear as France and Spain deployed a joint air fleet of 150 planes.

On April 2nd, 1958, the governments of Spain and Morocco signed the Treaty of Angra de Cintra. Morocco obtained the region of Tarfaya (colony of Cabo Juby), between the river Draa and the parallel 27º 40′, excluding Sidi Ifni and the Spanish Sahara. Spain had won the Ifni War at the cost of 300 lives and more than 500 wounded, but rather soon saw fit to slowly retreat from all its Moroccan possessions with the exception of Melilla and Céuta. On Franco’s orders, the war was excluded from Spanish pupils’ curriculum. It was as if the war never had happened. Spain retained possession of Ifni until 1969, when it returned the territory to Morocco.

I imagine that the boat in Portocolom’s harbour may simply belong to one of the veterans of the military conflict then, 53 years ago, down south, in the former Spanish colony. I’m rather sure that he, or she, has not forgotten the War of Ifni.

The photo (top) was taken in Felanitx, Spain. The date: October 15th, 2010. The time was 11:22:08. The photo (bottom) was borrowed from the Internet, courtesy of fotosdelamili.com.

By mallorcaphotoblog
On October 22, 2010
2 Comments