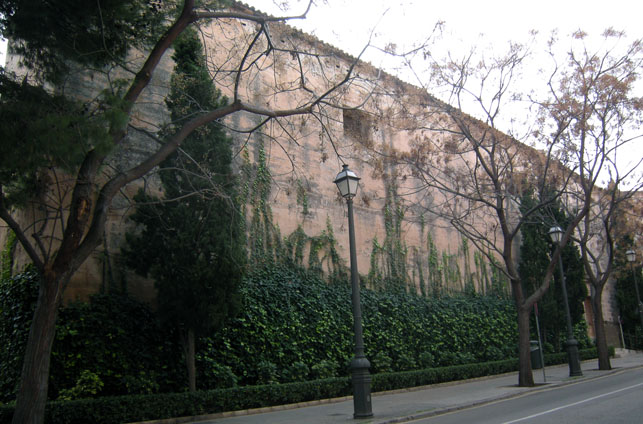 Do you know the district of Sa Calatrava in Palma’s upper old town? The barrio can be found in the immediate neighbourhood of the Call, Palma’s old Jewish quarters. In the old days, Sa Calatrava used to be occupied by tanners who were known as Calatravins, hence the name. Some tanneries still survive to this day.

Let’s go for a stroll. We start off from Plaça Sant Francesc, where we find the statue of Junípero Serra in a slightly disreputable posture with a young native Mexican boy. Don’t neglect to enter the church and monastery of Sant Francesc, dating back to 1281-86. Inside, there is the imposing tomb of Ramon Llull, amongst many other marvels. If the church should be closed you can gain entrance through the adjoining Collegi de Sant Francesc (admission 2 €) to enjoy the beautiful cloisters of the Basilica de Sant Francesc, a hidden oasis within the confines of a metropolitan city.

On leaving Sant Francesc and the cloisters, let’s head down Carrer Ramon Llull. We pass the Casa de Cultura on our way to the Plaça del Pes de la Palla, and at the bottom of the road, the Castell dels Templers (Castillo de los Templarios). During the Moorish period, this complex was known as the Almudaina de Gumara. The building supposedly is Spain’s oldest domestic building continuously inhabited ever since it was built.

A stroll through Sa Calatrava would be best undertaken equipped with a guidebook. The best one for this tour would be Walking Tours Around the Historical Centre of Palma (Ajuntament de Palma, 1994), now sadly out of print in its English edition, but still available in Catalan and Castilian.