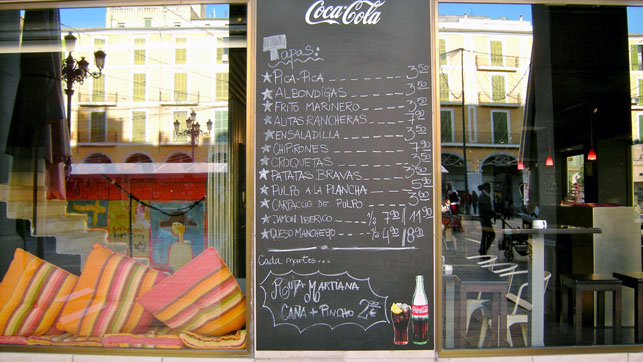 It’s hard to say what single item would come to one’s mind when one would try to associate things typical of Spain. Flamenco would perhaps rank in the forefront, or paella, or lemon trees, or sangría, or bullfights; what do you think? Come to think of it, maybe tapas are the most typical invention of today’s Spain.

There are various theories as to how tapas came about. Whatever the historical evidence, a typical tapa is served in a bar or bodega together with a drink. In some Spanish regions, small tapas are served free of charge when a drink is ordered. Here in Mallorca, we have to pay for our tapas, or its more recent variety, the pinchos (or pintxos). The simplest and most typical tapa would be a small plate full of olives, or cheese, or jamon Serrano. A whole number of tapas are served cold, such as tortilla, boquerones or chorízo. But there are dozens of tapas variants which are served hot, such as snails, pica-pica, gambas, datiles con bacon, croquetas, chipirones or patatas bravas.

In Spain, it is a custom to ir de tapas with friends which is a kind of bar hopping in the evening before one settles down for dinner at a later stage. In each bar, a drink would be consumed and one or two tapas eaten, a great way of enjoying the company of friends, of sharing the latest gossip and all along, trying the marvels of the local tapas cuisine.

Tapas bars of fame in Palma are El Pilón, La Bóveda or Tast. Try to avoid touristy places like the one in my photo, in Plaza Major, unless you are a tourist. Be daring and try to order something that you have not had before; that way you will slowly but surely get to know a large range of Spanish tapas delights. Good places for excellent tapas are the Club Náuticas in Palma’s suburbs such as Portixol and Es Molinar, as well as the bars in Palma’s fishing port, the Muelle (Moll de Pescadors). Further afield, excellent but pricey tapas are served at Can Miquel’s in Ses Salines.

By mallorcaphotoblog
On February 11, 2011
2 Comments