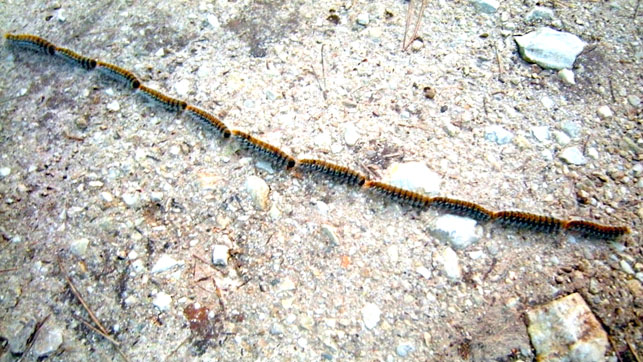 The processionary caterpillar (Thaumetopoea pityocampa) is out in force again now, here in Mallorca. The insect is active only during the colder times of the year, spending the warm summer months as a pupa buried in the ground. By March, the caterpillars are fully grown. Now they leave their nest, following each other in long, head to tail processions (see photo above) and seeking pupation sites in the soil.

Allow me to quote from someone who knows more about the little creature than I do:

… so-called because of their habit of walking head to tail in search of food, the processionary caterpillar is probably the most dangerous insect in the Mediterranean region. They are generally reddish-brown in colour and covered with long grey/white hairs known as setae. There may be hundreds of caterpillars seen walking nose to tail, winding along roadways, paths or golfing greens. The caterpillars are covered with brittle hairs, which cause a severe reaction when they come into contact with human skin. The hairs remain toxic even after the caterpillar has died and can also be carried in the air causing respiratory damage if breathed in. The caterpillars present a high risk during spring and are most virulent from late February. After pupation the resultant moth is an important food source for many animals including bats, birds and reptiles. The adult moths are not toxic.

The caterpillars feed on pine needles and cause devastation to pine forests. Take extra care when walking among pine trees from February onwards, especially if you have children or pets with you.

The hairs when in contact with the skin can cause severe irritation or anaphylaxis. General symptoms include severe itching, also localised pain which may spread to other parts of the body. The inhalation of hairs can cause serious respiratory problems and severe irritability of the eyes, stinging and symptoms of conjunctivitis which can lead to long-term eye damage. Children and the elderly can be more susceptible as they have a weaker resistance to the poison. Many victims show signs of shock. In serious cases, anaphylactic shock, increased heart palpitations and respiratory difficulty can lead to fatal consequences.

An ice pack will help to reduce the inflammation, take Antihistamine tablets as an early treatment. Apply antiseptic lotion topically to sooth the skin and seek medical assistance immediately. The effects can last many weeks or months. Corticosteroids may be prescribed to reduce inflammation as well as other treatments depending on individual circumstances and antihistamine tablets for allergic reactions.

The very first rule is never to touch these caterpillars and do not burn the nests as the resulting smoke is toxic if inhaled. All pets should be kept well away from the ‘processionals’ as they may try to eat them.

The heeding is quoted from British naturalist Dr Vejay K. Singh as published on the theolivepress.es website. Many thanks for the information. 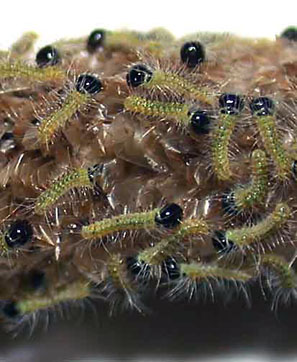 The photo (top) was taken near Felanitx, Mallorca, Baleares, Spain. The date: March 6th, 2011. The time was 18:33:35. The photo (bottom) was borrowed from the Internet, courtesy of web.cortland.edu.