Last Saturday, Mateo Isern, Palma’s new Conservative batle (mayor) was handed over the reigns to Palma’s Ajuntament (city council) by outgoing Aina Calvo. The first calamity the new alcalde will have to deal with on his first day of duty, i. e. today, is Palma’s latest white elephant, the Palau de Congressos (Convention Centre). One day earlier, last Friday, Acciona had pulled the stops on the 125,000,000 € building site over alleged unpaid bills to the tune of 27,000,000 € and halted all work by pulling out some 200 men from the site. Acciona is the Congress Centre’s contractor.

No doubt, much of the blame will be laid on the ex-alcaldesa as well as the also outgoing President del Govern de les Illes Balears, Francesc Antich. But, let us not be fooled. The ill-fated decision to have the Palau de Congressos built in the first place was made under the previous government of Jaume Matas and the then alcaldesa, Catalina Cirer. Matas, if you care to remember, was also responsible for two more white elephants in Palma at the time, the Palma Arena and the Palma Metro. Thankfully, one more white elephant of Matas’ making did not make it to the delivery room, an equally ill-bespoken Palma Ópera.

I am in two minds about all of this. Of course it is very sad to witness such repetitive incompetence at the hands of our elected leaders but, it is also quite amusing to be a spectator to the foolish acts of our wise men (and women). If only these foolish acts would not be so forbiddingly expensive. 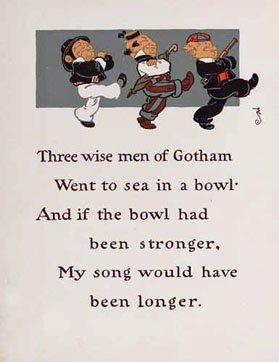 The photo was taken in Palma de Mallorca, Baleares, Spain. The date: June 10th, 2011. The time was 16:50:59. The illustration was borrowed from the Internet, courtesy of Wikipedia. The page shows an illustration by William Wallace Denslow for Three Wise Men of Gotham, from a 1901 edition of Mother Goose.