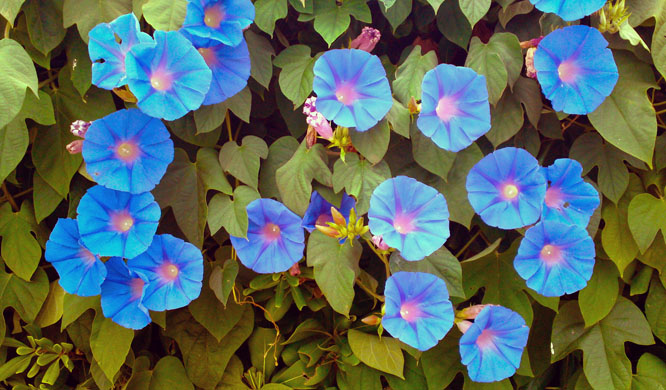 This beautiful Blue Morning Glory (Ipomoea indica) in a friend’s garden has a mesmerizing purplish colour. Unfortunately, my smartphone camera did not pick up the subtle hue. The Morning Glory is a perennial plant introduced to Spain from the Americas as an ornamental flower. In Mallorca, it has become naturalized over the centuries in many locations, such as on the banks of torrents. The related Ipomoea purpurea is similar in appearance, however, its flowers are smaller and it is a plant with an annual cycle. In Mallorca, the Blue Morning Glory is called Campanetes de jardí (Castilian: Enredaderas).

Ancient Meso-American civilizations and Aztec priests in Mexico were known to use the plant’s hallucinogenic properties. In China, the Morning Glory was known for its medicinal uses as a laxative. The Japanese were first to cultivate it as an ornamental plant. Here in Mallorca, the plant can easily be grown from seeds.