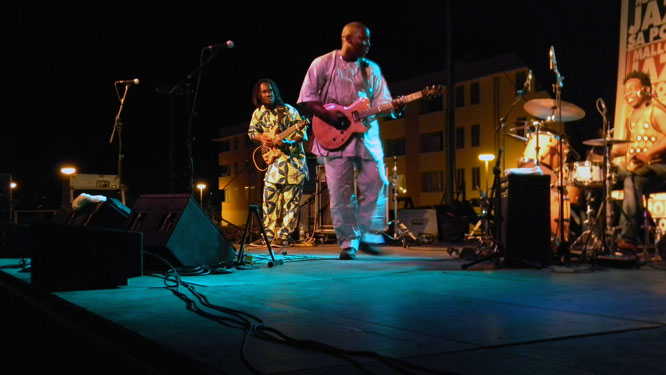 I do not know what started it but, someone, somehow had the idea of putting on a Jazz Festival in Sa Pobla, of all places. It started in 1995, and now, the Sa Pobla Jazz Festival is already in its 17th year. The last of three concerts was held last night and yours truly was there to tell you all about it.

Vieux Farka Touré from Mali may not strike you immediately as a Jazz musician but, on second appraisal, his music fits a number of labels, from Blues to Traditional and from Rock to Jazz. His energetic performance was quite superb. Vieux Farka Touré is the son of Ali Farka Touré (1938-2006). The son is as brilliant a guitarist as his father was. Last night, Vieux Farka Touré played with Tim Keiper on drums and the stunning Mamadou Sidibe on bass guitar. Some 2,000 people attended the free concert enthusiastically.

Jimmy Weinstein and his Traveling School will hold a four-day long Jazz Seminar from August 19th to 23rd. The seminar participants will hold a Final Seminar Concert on August 23rd at 21h30. Participation in the Jazz Seminar will cost you but, the concert will be free of charge to the audience. For further information, ring 687.434.795.

The Sa Pobla Jazz Festival encountered some serious last-minute funding problems this year, as did the more prestigious Festival de Pollença a month earlier. Money from the Consell de Mallorca had been promised as in previous years but, was cancelled in the last moment, following the change in government earlier this Summer. Unfortunately, the future of both Mallorcan music festivals seems to hang in the air and who knows whatever else might follow. Last night, voluntary contributions were sought and partly given. La Crisis is starting to bite.