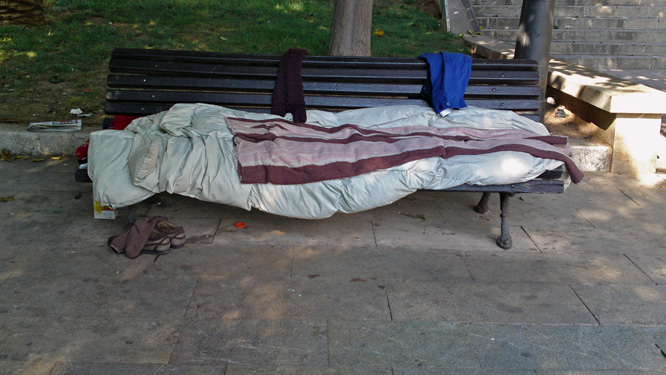 More people than ever, certainly more than over the last 35 years since Franco died, are sleeping it rough on the streets of Palma. Some have even made the Palma cemetery their temporary home, or so one can read in some of Mallorca’s daily press. La Crisis.

The Frailes of the Convent dels Caputxins in Palma’s Carrer Bastió d’en Sanoguera are handing out their Pa de Sant Antoni (a Boccadillo and a piece of Ensaïmada) every morning during the week (not on Sundays). Last year, there were about 150 visitors taking advantage of this charitable feeding of the destitute but, this year the average number of hungry takers has gone up to 400. La Crisis.

The Metropolitan Police in Palma reports an ever-increasing number of thefts and robberies at the Cementerio Municipal de Palma. Thieves and thugs strip graves and tombs of metal crosses and other valuable adornments that can be sold to a scrap metal dealer for hard cash. The culprits may not be the same homeless people sleeping it rough at the very same cemetery but, one never knows. Again, La Crisis.

People are saying that it will get worse. Stay tuned.