The Necrópolis of Son Real 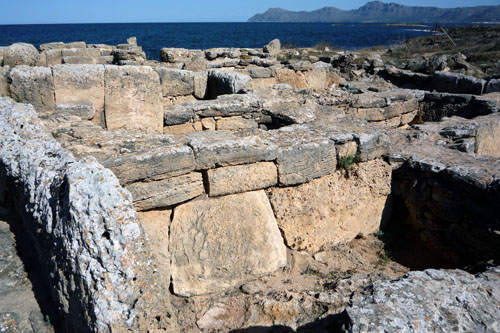 The Necrópolis de Son Real is situated on the outskirts of Can Picafort. This prehistoric graveyard dates back to the Iron Age and was used until the Roman period. More than 100 tombs have been found, holding some 300 skeletons along with animal bones, shells and various ornamental objects made of glass and ceramic material. The monumental tombs are partly burrowed into the rocky ground and partly built upon the rocks with local sand stone, carved from nearby rocks adjoining the Badia d’Alcúdia.

Parts of the burial grounds extend onto a small isle some 100 m into the sea, the Illot des Porros. One would need a small boat to access the isle, unless one wants to brave the waters swimming. Access to the Necrópolis de Son Real is either along the Platja de Son Bauló, coming from Can Picafort, or through the Public Finca of Son Real, a large estate with really beautiful, unspoilt landscape.