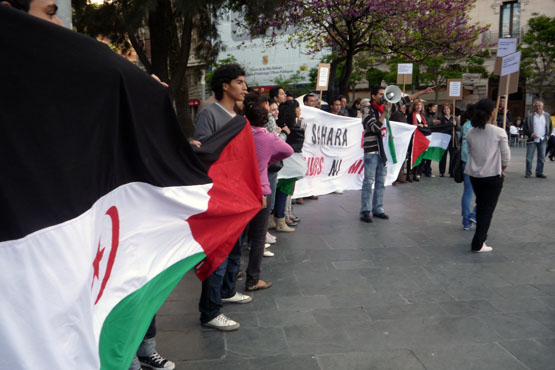 The people of Sàhara Occidental (Western Sahara) lamented their plight last Friday in Palma de Mallorca as well as in other Spanish cities, including Madrid.

Sàhara Occidental is a country not far from here in North Western Africa, south of Morocco. Spain seized control of Sàhara Occidental in 1884 and established a Spanish protectorate there. In 1975, only days before the death of Francisco Franco, Spain abandoned the territory without clearly giving independence to the country.

Morocco virtually annexed the larger part of the country in 1976 and Mauritania occupied the remainder. Morocco claimed the rest of the territory in 1979, following Mauritania’s withdrawal. The Sahrawi Arab Democratic Republic and the Polisario Front independence movement dispute the control of the territory and want independence. The United Nations define Western Sahara as a Non-Self-Governing Territory. A UN-organized referendum on the territory’s final status has been repeatedly postponed. Meanwhile, half the population of Sàhara Occidental have been living in what was meant to be temporary refugee camps outside their homeland on Algerian and Mauritanian soil, for over 33 long years now.

Clearly, Spain did not act responsibly in this matter at the time, nor ever since. It would seem that the conflict and the plight of the people of Western Sahara need to be addressed with some urgency and with a measure of integrity, by Spain and by us, the world community.