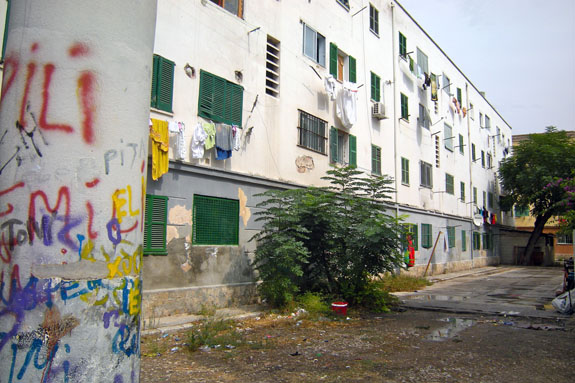 Most people know Mallorca as a holiday destination for tourists. Most expats view Mallorca as their paradise. The Mallorcans themselves see this island as simply the best home possible. Nevertheless, the island is also a social melting pot of people from all walks of life with all the blessings and shortfalls that this would entail anywhere in the world.

There are aspects of life on this island that the average tourist does not see. There exists a lowlife in Mallorca that not many foreign resident would know exists. I suspect that even some Mallorcans at times would rather pretend that certain things did not exist. If only …

My picture was taken the other day in Corea, a housing estate not more than twenty minutes from Palma’s Plaza Espanya by foot, and not more than five minutes by car. Corea is part of the Camp Redó district. The Corea housing estate has to be the toughest of any of Palma’s neighbourhoods. It is a social slum, a godforsaken dump, a miserable place, dismal, depressing and grim. A total of 568 flats were built at the edge of town during the years of Generalísimo Franco in 1954, but since then and during the years of the boom Palma has expanded much further. Since the Eighties it has become apparent that Corea is a confictive area with a high level of social tension, okupas (squatters), drugs, gypsies, unemployment, misdemeanor and vandalism. It is said that even the police force does not enter the estate any longer. Since 1996, various asociaciones de vecinos (residents associations) have made petitions to Palma’s townhall to have the estate refurbished and modernised. For the last two years, plans have been drawn up to embellish the estate, but so far, alternative housing has only been found for 8 tenants out of the 568 families living there. A mere drop in the ocean.

Something must be wrong with our society if we allow people to live in such inhuman conditions.