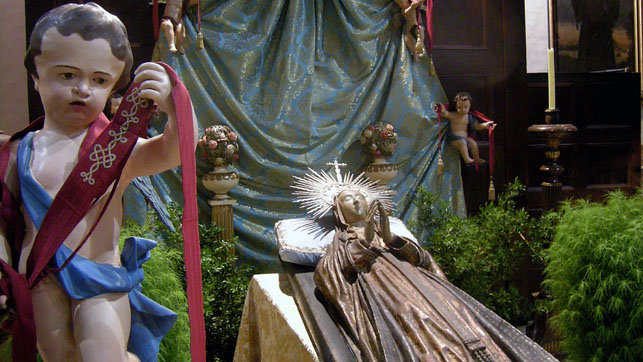 I am not at all an expert in matters of the Catholic church but, wanting or not, one is quite inevitably engulfed with matters of church traditions in a country as deeply entrenched in the Catholic religion as Spain was and still is. Take the Virgin Mary for instance.

August is the month when Mallorca celebrates the La Mare de Déu d’Agost or La Mare de Déu de la Assumpció (Assumption of Virgin Mary), one of the major festivities in the Catholic calendar. The actual day of the religious occasion is August 15th, but celebrations were in fact held in Mallorca from last Friday and will continue until next Monday. The celebration is also called Dormició de Maria (Dormition of Virgin Mary) and is represented in some of Mallorca’s churches by a reclining statue of the deceased saint, lavishly adorned and prominently displayed. I could direct you to the Esglèsia Parroquial de Sant Miquel (see photo above), the Esglèsia Parroquial de Sant Nicolau, the Esglèsia Parroquial de Santa Eulàlia or the Basílica de Sant Francesc, all of which you’ll find in Palma, to name but a few. In Mallorca’s Part Forana, the pueblos and towns of the hinterland, you’ll find parish churches adorned with the Ascent of Virgin Mary in places such as Campos, Costitx, Felanitx, Muro, Sa Pobla, Sineu, again, to name but a few. Have a look for yourself, but hurry. The show will come to an end next Monday, August 23rd.