The Plaza de Islandia in Palma 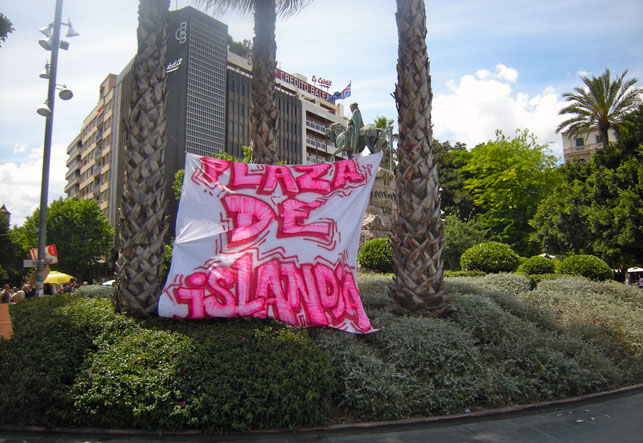 Palma’s Plaza de España has been renamed as Plaza de Islandia by the protesters known as the Movimiento 15-M(ayo). Fittingly, the statue of Jaime I the Conqueror, carries a flag of Iceland. The sit-ins and sleep-ins continue now in its eighth day, gathering momentum all over Spain. Yesterday, there were said to be 75,000 – 100,000 indignant citizens protesting in most major Spanish cities, such as Madrid, Valencia, Sevilla, Barcelona, Bilbao, Pamplona, Alicante, Murcia and others. In Palma, there were perhaps 800 – 1,000 protesters, with about 200 of them camping out overnight. Strictly speaking, the demonstrations were prohibited by the Spanish Electoral Board as of yesterday but, the police force did the wise thing of not interfering as long as the protests remained peaceful.

Today, municipal elections will be held in all of Spain, as well as regional elections in all Spanish provinces with the exception of Catalunya, Andalucía, Galicia and the Pais Vasco. The protesters have vowed to continue their campsite protests beyond Election Day.

The homage to Iceland is made in reference to a referendum there a month ago. Previously, the Icelandic government had collapsed due to the public dissent over the handling of the financial crisis.