They Had A Dream 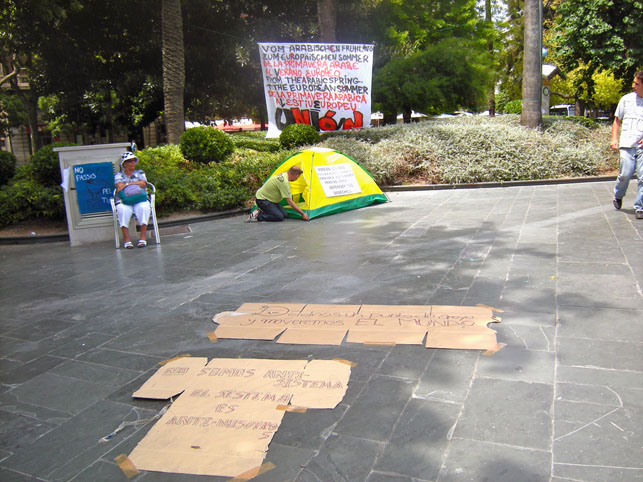 Once upon a time, some people in Spain were unhappy about how democracy worked or rather, didn’t. They were indignant about the political parties in Spain and they took to the streets and the main squares of the large Spanish cities.

But recently, this nationwide protest movement, known by the media term of Movimiento 15-M (after the date of the first day of protest, May 15th) was beginning to annoy the authorities. Four weeks into the protest, Barcelona’s Plaça Catalunya was taken back by the strong-arm of the Catalonian authorities. Then, after seven weeks of peaceful demonstrations in Madrid, the Puerta del Sol was cleared of the indignados (indignant protesters), a week ago. And finally, last Sunday night police moved in and cleared Palma’s Plaça d’Espanya. About 100 protesters had held out there until then.

Is this the end of Spain’s indignant protest movement and the end of their dream of a true democracy, or will the desperation of the Ni-Ni generation move on to a new level?

Monday night saw a demonstration of 300 protesters in front of Palma’s town hall, complaining about the amount of brutality used by the police, the night before. More protests were staged on Tuesday and again, yesterday. Protest demonstrations are planned for next Sunday, up and down the country. What has been a relatively peaceful citizens’ movement may now well turn into a more pronounced confrontation. We are not against the system, the protesters claim, the system is against us (see photo). They may well have a point.

The photo (top) was taken in Palma de Mallorca, Baleares, Spain. The date: May 21st, 2011. The time was 11:18:23. The photo (bottom) was borrowed from the Internet, courtesy of diariodemallorca.es and the photographer, Lorenzo.

By mallorcaphotoblog
On July 7, 2011
3 Comments