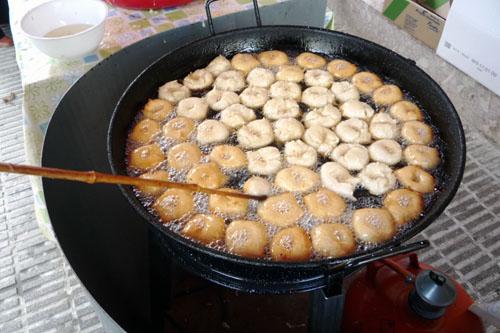 During the Tots Sants celebrations, Mallorcans celebrate the festivities with plenty of sweet pastries. Bunyols or Buñuelos are particularly popular at this time of year. Bunyols are fritters commonly made of boiled potatoes, flour, eggs, butter or lard, yeast and sugar; they are fried in hot oil and then sprinkled with sugar.

Bunyols are common in Catalunya and Valencia, too, but less so in Madrid. They are also known in erstwhile Spanish colonies such as Mexico, the Philippines, Colombia and Cuba, as well as non-Spanish territories such as India, Turkey (where the fritter is called Lokma) and Russia. It may be that Buñuelos are connected to the Jewish community at Passover and/or Hanukkah times, but I am not sure.

There are other Mallorcan sweets and pastries eaten at the occasion of All Saints, like Panallets (made of marzipan and covered with pine kernels) and Rubiols. Children traditionally are given Rosarios (rosaries made of boiled sweets).

By mallorcaphotoblog
On November 2, 2008
2 Comments