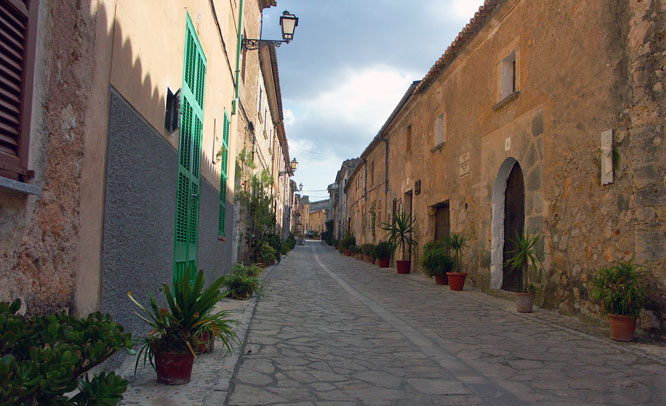 Miquel Josep Serra i Ferrer was born in Petra, Mallorca, in November of 1713. He is better known as Fray Junípero Serra, a name he took on in honour of Saint Juniper when he joined the Order of Friars Minor, commonly called simply the Franciscans, in Palma in 1731. In 1738, he was ordained a priest and acquired a degree and PhD in theology. In 1749, he traveled to Mexico as Apostolic missionary together with other Franciscan monks.

The first house on the right in today’s picture is often pointed out as being the birthplace of Junípero Serra when in fact he stayed there from the age of 5 until he turned 18 and joined the Franciscans. The house where he was actually born does not exist any longer.

The pueblo of Petra is very proud of its famous son. The town celebrates Saint Juniper’s acolyte with a number of memorial plaques, erected in recognition of the missionary’s accomplishments in Mexico and in the province of Las Californias, present day’s state of California, USA, including not only the not-quite birthplace but also, a museum dedicated to the man who was beatified by the Catholic Church in 1988.

A visit to the pueblo of Petra is well worth your while even if you are not much of a devotee of the Catholic faith yourself, simply for the historic ramifications that originated from this very place.