The Merriment of Food 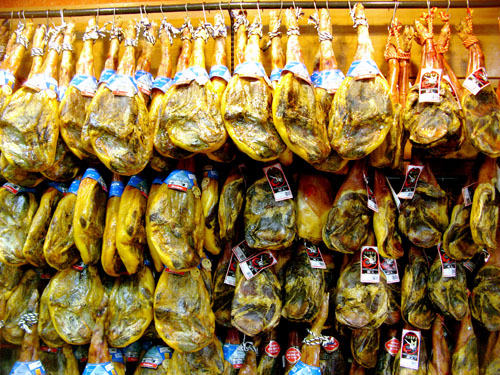 Christmas time in Spain is predominantly a succession of culinary feasts.

Christmas Eve is called Noche Buena, when friends and families like to go out to wine and dine. Spanish restaurants put on special Noche Buena dinners that will easily set you back 100 € or more per person. Some people book their favourite restaurant now for Noche Buena 2008.

On Christmas Day, tradition has it to gather around the table at home, or rather, around Mum’s table, for a big and festive family feast. In the old days, pavo real may have been served (peacock), but nowadays turkey, lobster or sirloin of beef get the preference.

Starters are either codornizes (quails) or Jamón Serrano (see photo). Cava is the preferred drink at Christmas, with the semi-seco variety (semi-sweet) being the preferred choice. In Mallorca, Gató (rich and moist almond cake) with almond ice cream are served for desert.

On Boxing Day, another big meal is in waiting with another big family gathering, this time at the grandparents’ home. On this island, Sopas rellenas are traditionally served then (a type of ravioli soup), with turrón and polvorones coming in for desert. Spanish Brandy and a good cigar for the alpha males, probably from the Dominican Republic or Cuba, are offered for afters.